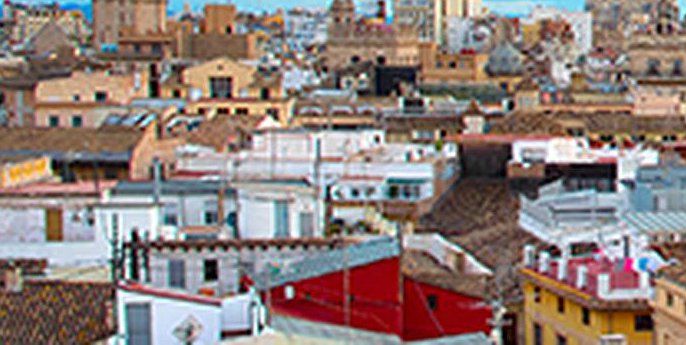 10 THINGS TO DO IN VALENCIA

Traveling to a new place is one of the greatest adventures, or at least it is in my book. I love the idea of losing myself in the streets of a city I don't know, of mingling among the crowd, of visiting places that are not on my tourist guide.

Today, I want to take you around Valencia, the third largest city in Spain after Madrid and Barcelona, with around 800,000 inhabitants.

The city is situated on the banks of the Turia river, on the east coast of the Iberian Peninsula, fronting the Gulf of Valencia on the Mediterranean Sea. Its historic centre is one of the largest in Spain, with approximately 169 hectares, this heritage of ancient monuments, views and cultural attractions makes Valencia one of the country's most popular tourist destinations.

Starting in the mid-1990s, Valencia, saw rapid development and transformed it into a newly vibrant city. Many local landmarks were restored, including the ancient Towers of the medieval city (Serrans Towers and Quart Towers), and the Saint Miquel dels Reis monastery, which now holds a conservation library. Whole sections of the old city, for example the Carmen Quarter, have been extensively renovated. The Paseu Marítim, a 4 km long palm tree-lined promenade was constructed along the beaches of the north side of the port (Platja de Les Arenes, Platja del Cabanyal and Platja de la Malva-rosa).

In its long history, Valencia has acquired many local traditions and festivals, among them the Falles, which were declared Celebrations of International Tourist Interest (Festes de Interés Turístic Internacional) on 25 January 1965 and UNESCO's intangible cultural heritage of humanity list on 30 November 2016, and the Water Tribunal of Valencia (Tribunal de les Aigües de València), which was declared an intangible cultural heritage of humanity (Patrimoni Cultural Inmaterial de la Humanitat) in 2009.

In addition to these Valencia has hosted world-class events that helped shape the city's reputation and put it in the international spotlight, e.g. the Regional Exhibition of 1909, the 32nd and the 33rd America's Cup competitions, the European Grand Prix of Formula One auto racing, the Valencia Open 500 tennis tournament, and the Global Champions Tour of equestrian sports. The final round of the MotoGP Championship is held annually at the Circuito de la Communitat Valenciana.

The 2007 America's Cup yachting races were held at Valencia in June and July 2007 and attracted huge crowds. The Louis Vuitton stage drew 1,044,373 visitors and the America's Cup match drew 466,010 visitors to the event. (source wikipedia.org)

So we're talking about a vibrant, lively city that may arouse the interest of arts lovers, sport enthusiasts, outdoorsy crowds and gourmets from all over the world.

It's not always easy, to pick and chose what to see, so let me help you with a shortlist of what's really worth doing in Valencia.

1. Seeing Valencia at your feet, from the top of the Miguelete Tower

Bell tower "El Miguelete" is a gothic style construction made in the fourteenth Century and finished in the fifteenth. Authors were Cathedral’s master Andrés Juliá and the architect Pere Balaguer, who also built Serranos Towers.

Its name, "El Miguelete", comes from the name of its biggest bell "Miguel", made in 1532 and with more than ten tons of weight. Inside the tower there is a very long and exhausting spiral staircase with 207 steps up to the summit from where you can enjoy amazing views of the entire city.

2. Sipping a bombon coffee under the Torres de Serranos

A bombon coffee is an expresso served with sweetened condensed milk. Right in front of the Serrans Gate, one of the twelve gates that formed part of the ancient city wall, the Christian Wall of the city, you'll find a nice little bar, la Maruja. Sit there and enjoy the view.

3. Getting lost in the colours of the Mercado Central

The Central Market is a modern Art Nouveau building that hosts the largest public market of the city.

4. Strolling around in the Turia Park

The old riverbed is now a verdant sunken park that allows cyclists and pedestrians to traverse much of the city without the use of roads. The park, called the 'Garden of the Turia' boasts numerous ponds, paths, fountains, flowers, football pitches, cafés, artworks, climbing walls, an athletics track, a zen garden and more. The many bridges overhead carry traffic across the park.

Towards the park's eastern end is the Gulliver Park, a children's adventure playground featuring a huge fibreglass model of Lemuel Gulliver tied to the ground with ropes. The model is constructed such that the ropes are climbable. In addition, Gulliver's clothes form slides and ladders on which to play. Also towards the eastern end of the river course is the Valencian Music Palace (el Palau de la Música Valenciana). Marking the park's eastern extreme is Valencia's new City of Arts and Sciences.

The Llotja de la Seda (the Silk Exchange Market) is a late Valencian Gothic-style civil building in Valencia, Spain. It is a principal tourist attraction in the city.

The UNESCO considered it as a World Heritage Site in 1996 since "the site is of outstanding universal value as it is a wholly exceptional example of a secular building in late Gothic style, which dramatically illustrates the power and wealth of one of the great Mediterranean mercantile cities.

Valencian Water is a cocktail made from a base of cava or champagne, orange juice, vodka, and gin. In general, it is served in pitchers of various sizes and is drunk in a broad cocktail glass. It was made for the first time in 1959 by Constante Gil in the bar Café Madrid de Valencia. Be careful. Agua the Valencia seems light and fun, but you can very easily get tipsy with just a couple of glasses.

8. Admiring how majestic nature is at the Glorieta

A picture is worth a thousand words.

And yes, it's a a weeping fig, the one that died in my flat because I was opening the window too often. It grows pretty well here, doesn't it?

9. Surviving a pepito at La Pilareta while the waiters yell at each other

La Pilareta is a landmark on the Valencian tapas landscape. The food is nothing fancy, it’s basic, inexpensive and authentic, and that’s the point. La Pilareta is coming up on its 100th birthday and the interior hasn’t changed in about that long. The tile-covered walls, ornate woodwork and long zinc bar add to the historic atmosphere, and the decades-old tapas recipes don’t hurt either. The specialty of the house is clóchinas al vapor, a small type of mussel native to the region and in season from mid May to late August, steamed and served in a juicy broth.

A pepito is basically a deep-fried sandwich with tuna and eggs. Not the lightest, surely the best.

10. Having a paella on the beach

And here we go, the queen of the Spanish cuisine. Let's be very, very, very clear here.

There are only two kinds of paella: Paella Valenciana and Paella de Marisco.

Paella Valenciana is with chicken, rabbit, vegetables and snails. If you don't like snails, ask the waiter to have one without.

Paella de Marisco is with seafood.

Anything else is just "arroz con cosas" (rice with things).

Paella is a traditional lunch food. Restaurants that serve paella at night are just tourist-traps.

Paella is very much like a religion in Valencia. Be respectful.

Casa Navarro, Patacona beach, Alboraya is the best place to have your paella. Better call before you go. Reserve a table outside and enjoy the beauty and the taste of this wonderful city.